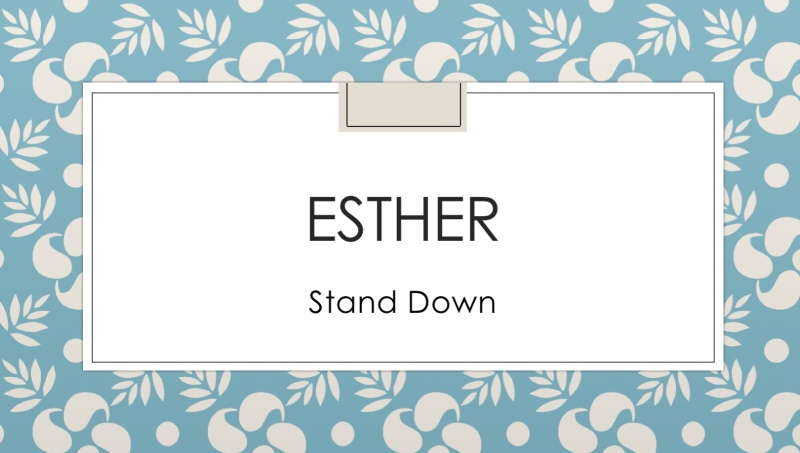 Haman was angry at Mordecai’s refusal to bow down. But not only did Haman hate Mordecai, he hated all the Jews as well. Wanting to rid himself of Mordecai’s dishonor and the Jewish people, Haman plotted to have all the Jews killed.

Mordecai and Esther messaged back and forth about the proper course of action. From this passage comes the most famous phrase in the book of Esther, “Who knows, perhaps you have come to your royal position for such a time as this” (4:14).

To readers looking backward at the sovereign intervention of God over and over again for the protection of His people, Mordecai’s statement is obvious. But Esther was the one who had to act. The future of the Jewish people depended, at least in part, upon her action. And yet, if the king did not receive her, she could be immediately killed.

Remember how quickly the king dealt with her predecessor, Vashti. But Esther did not act immediately. Notice what she ordered Mordecai to do. She insisted that the Jewish people fast for three days. While the word prayer is not included in the narrative, fasting in Jewish faith nearly always included prayer.

It is safe to assume Mordecai, Esther and the Jewish people fasted and prayed over this dilemma and over Esther’s opportunity.

They stood down. They paused their planning in order to pray. They waited in faith-filled fasting rather than in worry and fret.

Why? I think Esther and Mordecai knew it was entirely possible she had been ordained for this moment, but that did not mean they would act in brazen self-confidence. They stopped to pray.

I think sometimes we are not wrong in our assessments of situations, but we are often wrong in the bravado of our actions. Instead of praying, we plot. Instead of waiting, we work. Instead of trusting, we talk.

Esther and Mordecai give us an example we would be wise to follow – stand down, fast, pray and trust.

Follower of Jesus Christ. Husband to a beautiful wife and fantastic mom, Jean Hefner. Daddy of two boys, William and Nathan. Senior Pastor at Wilkesboro Baptist Church. Author of Commissioned: Leading our Neighbors and the Nations to Follow Jesus. Professor of Western Civilization and Theology at Fruitland Baptist Bible College. Ph.D. graduate from the Billy Graham School of The Southern Baptist Theological Seminary.

My Takeaways from the #SBC2018

Peace in the Storm